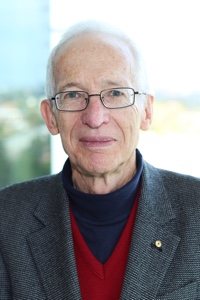 Bruce Armstrong is an epidemiologist and public health physician whose career has encompassed research, academia and public service; the latter including Commissioner for Health for WA, Director of the Australian Institute of Health and Welfare, Director of Research and Registers at Cancer Council NSW, founding Chairman of the Sax Institute Sydney, Head of the University of Sydney’s School of Public Health and inaugural Chairman of the NSW Bureau of Health Information. Bruce is recognised internationally for his research into the causes and prevention of cancer, having published over 650 papers in scientific books and journals. He has retired from full-time employment but continues to actively pursue his interests as an Emeritus Professor at the University of Sydney and an Adjunct Professor at the University of WA. Bruce was made a Member of the Order of Australia in 1998 for his work in cancer epidemiology and a Fellow of the Australian Academy of Science in 2000. He received the inaugural New South Wales Premier's award for Outstanding Cancer Researcher of the Year in 2006 and has been listed by Thomson Reuters in both 2015 and 2016 as among the ~3,000 most highly cited researchers based on their numbers of highly cited papers published in recent years.